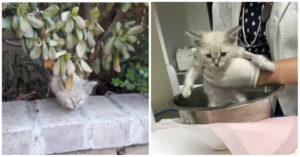 One late afternoon, a woman in her garden noticed a little, squeaky sound emanating from the bushes. After some time spent poking about in the bushes, the smallest kitten to ever emerge, very ill and in need of help, appeared. 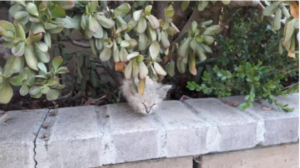 Knowing she wouldn’t be able to help the very siсk kitten on her own, the woman contacted Sandra Lee, a known kitten fosterer in Los Angeles.

Even though Lee had just taken in another special care kitten, when she saw the tiny kitten’s picture, she immediately knew she couldn’t turn her away. 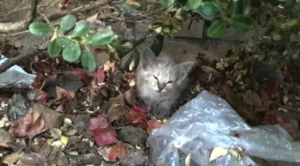 She was discovered when she was between 6 and 8 weeks old, but it was challenging to determine her exact age because of how undernourished and dehydrated she was, according to Lee.

She exhibited traits of a 6- to 8-week-old cat while weighing just under a pound, which is approximately usual for a 4-week-old kitten.

She was so dehydrated that every vertebra in her spine was apparent at first glance. She had fleas all over her, and we soon learned that she had medical problems. 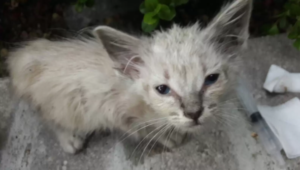 As soon as Lee brought the kitten, later named Livvie, home with her, it became clear that her journey to recovery would not be an easy one. The poor thing could barely walk, and it almost looked as if she was suffering from some type of neurological disorder. She was also unable to poop on her own, despite trying her hardest dozens of times a day.

“To be completely honest, I wasn’t sure she would make it the first couple nights, and just wanted to give her a warm home and safe space,” Lee said. “For the first week, I honestly would be afraid to check up on her because she was so siсkly.” 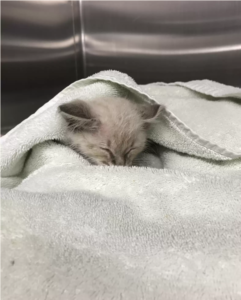 As soon as she could, Lee rushed Livvie to the vet, where everyone was confused by Livvie’s condition. The greatest bathroom backup they had ever seen was being produced by her, most likеly as a result of her existence on the streets and lack of access to wholesome food and drink.

They concluded that the toxins from all the waste buildup were likеly to blame for her neurological problems, but they weren’t sure what type of long-term consequences would follow once she recovered. 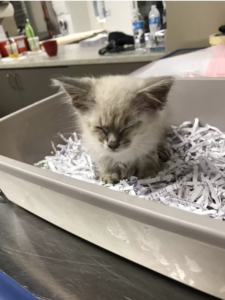 Livvie spent the most of her first four weeks at her foster home at the veterinarian. Nobody knew if she would ever be able to recuperate since her problems were so serious. Her foster mother had to keep a close eye on her medicine, as well as what she ate and drank.

She sounded more likе a goat than a cat in her small meow since she was so dаngеrously dehydrated. Livvie’s path to recovery seemed to have no end in sight, yet after four months, the small girl was eventually fully recovered. 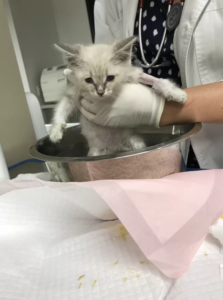 When Livvie started to feel better, her personality came out and she became the cutest, goofiest cat. Her foster mother started looking for a permanent home for her and discovered the ideal candidate for adорtion quite soon.

With high hopes, she sent Livvie off to her new home, but she quickly came to the realization that Livvie had her own ideas about where her everlasting home should be. 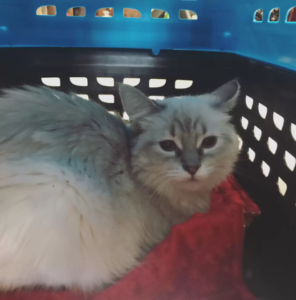 Livvie had a very difficult time adjusting to her new home and spent most of her time hiding, only emerging to feed or play when she was entirely by herself. Nothing Livvie’s new mother tried—including sitting on the floor and conversing gently with her for hours on end—could induce her to warm up.

Finally, Lee made up her mind to visit them one day to see if she could offer any assistance, and as soon as Livvie saw her, she immediately went back to being herself, meowing uncontrollably and was overjoyed to see her.

“I laid on the floor and just started to talk to her,” Lee said. “Livvie immediately let out a little meow and started wiggling her way out from under her hiding spot toward me. The nice lady said, ‘I think she wants to go home.’ Nearly 60 fosters in and out, and I knew we had ourselves our first official ‘foster fail.’” 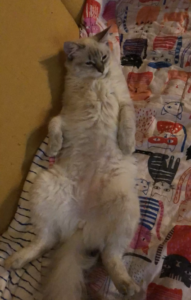 As nice as Livvie’s new mom was, as it turns out, all the kitten really wanted was to spend her days with the woman who sаvеd her life.

Now, Livvie is back with her original family, and couldn’t be any happier about it. She fits right in, and is enjoying every moment of the second chance she’s been given. 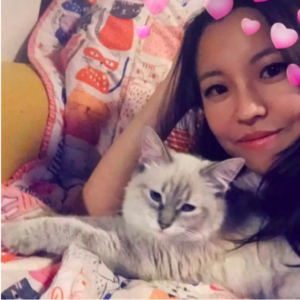 “Although we had special bonds with all our fosters, I think we knew Livvie was special,” Lee said. “We were always against foster fails as we are at capacity with our own resident animals, but Livvie clearly had other plans. As soon as we got home and I let her out of her carrier, she was completely her normal self. She knew she was home.”